Category: Outstanding Non-Business Achievement of the Year, Poland
An internationally unique work of art created on Europejski square – a Disappearing Mural, was officially unveiled end of June.The theme of the mural refers to the important aspect of peace in the world. The Disappearing Mural was created on the area of the largest fountain at Europejski square - and it can be seen only when it comes into contact with water - when the fountain in on or when it rains. The official unveiling of the artwork was accompanied by a musical happening, with performances of several artists of the Polish music scene.
The key elements of the mural include: (i) The Mermaid and the Triton - arranged in the form of a yin and yang symbol, which symbolizes a perfect balance, a combination of duality of reality, order and harmony governing the entire universe, (ii) Picasso pigeon - painted in Warsaw Wola district during his visit to Poland, (iii) the lyrics of the song of the leader of the Pogodno band "Don't be afraid of the rain - because I'm the rain myself" - referring to the theme of the mural, as well as the words "Let's heal the world and make it a better place" - the text is on the mural's outline – written in five languages (Polish, English, German, Spanish and Ukrainian).
People from the world of art, stage, sports, culture, friends with Galeria Przechodnia were invited to paint the letters in the mural - thus they have a real contribution to its final creation.
Unfortunately, peace in the world is not something permanent - this thesis became the keynote for the creation of our disappearing mural. Until now, such works were created in Seoul. These murals - thanks to the use of special nano paints, appeared there during the rainy monsoons and were intended to improve the mood of the city inhabitants. There is not much sign of such projects being implemented in other places - which makes our idea even more unique, on an international scale.
Let's heal the world and make it a better place – the message surrounding our mural meant to show that art is the weapon of artists. In the present situation in the world, it is one of the ways to protest against the war and its cruelty. There is another slogan on the mural which says: Don't be afraid of the rain - because I'm the rain myself " and it also fits perfectly into the theme of the mural. These words are a quotation of one of the songs of the recently died outstanding Polish artist, leader of the Pogodno band - Jacek Budynia Szymkiewicz. The mural additionally commemorates his work 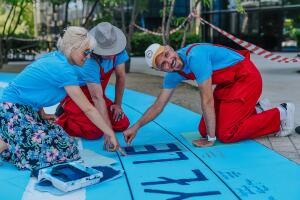