The Jury has chosen the winners of the Eurobuild Awards 2017! 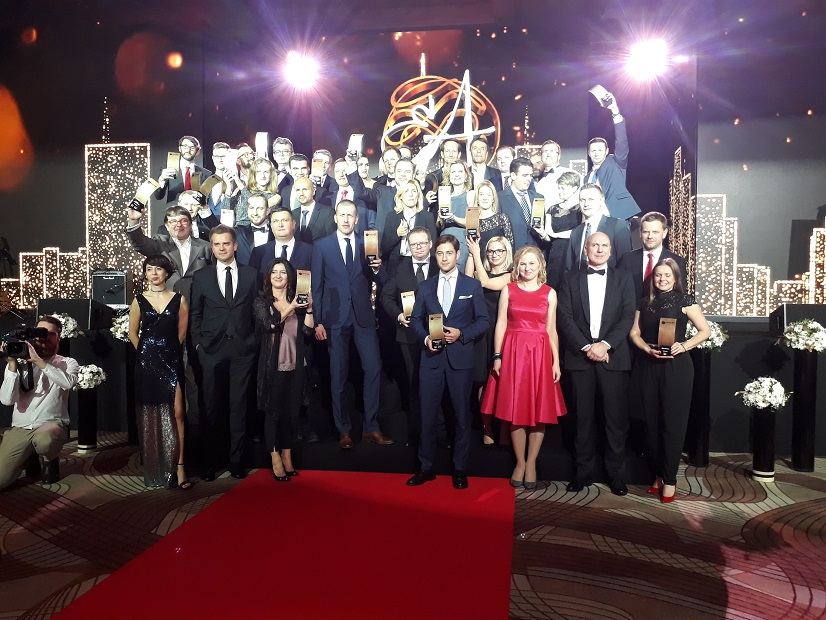 For the eighth time the Eurobuild Awards jury composed of 238 real estate professionals have selected the buildings and companies that have had the greatest effect on the Polish real estate and construction markets in 2017. Over 900 people gathered at the DoubleTree by Hilton in Warsaw on December 6th for the gala ceremony.

For those categories that covered the Polish market, statuettes were awarded to

Posnania for New Shopping Centre of the Year, Poland. The two runners up were: Galeria Północna and Galeria Tomaszów

CBRE for Office Agency Team of theYear, Poland. The consultancy beat off Colliers International and JLL.

JLL for Retail Agency Team of the Year, Poland. JLL and CBRE were also in the top three.

Colliers International for Warehouse Agency Team of theYear, Poland. While JLL and CBRE took up second and third places.

JLL for Investment Agency Team of the Year, Poland. CBRE and Cushman& Wakefield also came close to winning the prize.

Dentons for Law Firm of the Year, Poland, The other two places were taken up by GreenbergTraurig Grzesiak and CridoLegal.

Bank Zachodni WBK for Financing Provider of the Year, Poland. Pekao and Helaba-Landesbank Hessen-Thuringen also found themselves on the podium.

Arcadis for Building Consultancy of theYear, Poland, And it was closely followed by Gleeds and JLL.

JLL for Property Management Company of the Year, Poland. CBRE and Cushman& Wakefield also found themselves on the podium.

CridoTaxand for Tax & Financial Consultancy of the Year, Poland. EY and KPMG also came close to winning the statuette.

Sweco Consulting for Green Services Provider of the Year, Polamd. The next two places were taken by Go4Energy and Arcadis.

Skanska for Real Estate Construction Company of the Year, Poland. CFE and Kajima followed closely behind.

HB Reavis Poland for Office Developer of the Year, Poland. SkanskaProperty Poland and Echo Investment were also close to winning the award.

Unibail-Rodamco Poland for Retail Developer of the Year, Poland. Also in the top three were Echo Investment and GTC.

Łódź for Most Investor-Friendly City. And it was followed closely behind by Katowice and Warsaw.

Eurobuild Awards 2017: The best within the Central and Eastern European region

Eurobuild Awards are also awarded in a number of categories that cover the CEE region. For these awards the statuettes went to:

Panattoni for Warehouse Developer of the Year CEE. Prologis and P3 LogisticParks were also in the top three.

Griffin Real Estate for Investor of the Year CEE, and was closely followed by EPP and Union Investment Real Estate

For the last category, Investment Deal of the Year CEE, the jury was most impressed by the transaction between CPI and CBRE Global Investors, in which eleven mainly retail real estate properties changed hands in the Czech Republic, Polamd, Romania and Hungary. CPI Property Group bought the portfolio for EUR 650 mln. The debut of Griffin Premium RE on the Warsaw Stock Exchange and the purchase of the Q22 office building by Invesco Real Estate also competed for the prize.