Going for the first, the second... for the ninth time! 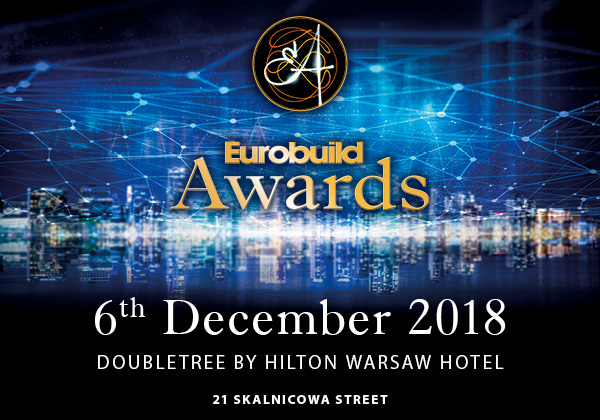 Work has now started on this year’s Eurobuild Awards. “Around the beginning of this year we signed the first few partnership contracts for the Eurobuild Awards, so we feel confident that we will be able to count on the participation of leading real estate companies once again. We believe that the Eurobuild Awards has now become an essential fixture for the market – and this also gives us immense satisfaction,” says Katarzyna Matejuk, the director of Eurobuild Conferences. Not only have contracts been signed for this year’s Awards, but many kind words have recently been said about the competition by its partners. “The Eurobuild Awards is one of the most important enterprises in the CEE real estate industry sector. It is an opportunity to honour the market leaders as well as the best transactions and projects of the last year. As a developer of logistics and industrial space, we appreciate the fact that the organisers of the competition are committed to such fundamental principles as maintaining a professional approach, the independence of the jury as well as the objectivity of the research institutions involved. Because of this Panattoni Europe is once again a partner of the event,” explains Robert Dobrzycki, the CEO of Panattoni Europe. Market players are also keen to emphasise that participation in the Eurobuild Awards is an opportunity to maintain good relations with clients. “We are partnering the Eurobuild Awards once again because it is a key event for the commercial real estate market in Central and Eastern Europe. It enables us to continue to form and develop good relationships with our partners and clients,” comments Agnieszka Góźdź, the head of the leasing department of leading warehouse developer MLP Group. Martin Erbe, the head of international real estate financing for Continental Europe at Helaba, is of a similar opinion: “The Eurobuild Award Gala is the best place to meet the most influential people in the real estate industry in Poland. And at the same time it is the best place to party with them!”

This year’s Awards will not involve any major changes to the winner selection process. Further details about the individual stages will be revealed soon on the www.eurobuildawards.com and www.eurobuildcee.com websites. In the meantime, we would like to invite all those companies that can see the potential of involvement in the Eurobuild Awards for further enhancing the image of their companies and brands.