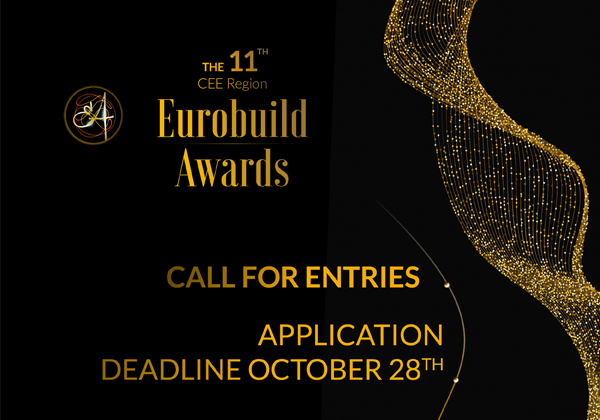 Have you been anxiously waiting for this? Because we have! The nomination process for the 11thEurobuild Awards is now underway! As usual, the winners will be announced at the Eurobuild Gala in December!

After ten years (and, it should be added, ten wonderful years!) of the Eurobuild Awards, the time had come for refreshing the format a little. When we were thinking about how to do this at the beginning of the year, our idea was to put more emphasis on categories covering the entire Central and Eastern European region. In the light of this, the slogan we came up with for this year’s event was: ‘And now for the next chapter…’. But back then none of us could have known how prophetic these words would turn out to be. This year has turned out to be very different, but not in the way anyone could have imagined. Despite the fact that all the media coverage has been dominated by Covid-19, we still aim to hold true to that promise.

So we are now delighted to announce that the nomination process for the 11thEurobuild Awards is now open! You are invited to submit your applications in individual categories via the online system available at: www.eurobuildawards.com. This year’s Eurobuild Awards will be taking place in unusual circumstances and according to slightly modified rules, but we hope that it will generate all the usual excitement and elation –for ourselves, our partners and the companies nominated –as ever, and the awards themselves will be an immense source of pride for the winners.

The nomination process closes on October 23rd, with the winners of the Eurobuild Awards 2020 to be announced at the Gala on December 8th. We will keep you regularly informed about each subsequent stage and will soon give you further details of the event.